GPT-3 is best thought of as an autocompleter. It replies with what it thinks the internet would reply with.

Nick Cammarata offers a way to think about GPT-3.

while getting fooled by absurd answers without noticing they are nonsensical e.g.

1/ Asked @RichardDawkins on GPT3 to explain the central idea of his book "The Selfish Gene".

Here's what it said.

(Everything after Dear Paras is GPT3). pic.twitter.com/hAfeeYxPAP

I didn't quite understand everything in your tweet, so I passed it through the @OpenAI #GPT3 API.

It took multiple runs and some tweaks, and I'm still not sure I can trust it entirely, but here's what it came up with.

I think I understand your point now. Or have I been misled? pic.twitter.com/X0noJX7D0v

Which seems to conflict somewhat with Gwern's results that GPT-3 cannot do parity checking. He offers an explanation which I still need to spend time on to understand.

The folks at Tinkered Thinking write a podcast episode in conjunction with GPT-3.

@nicklovescode finds that GPT-3 is a highly potent therapist.

This is the prompt he used: 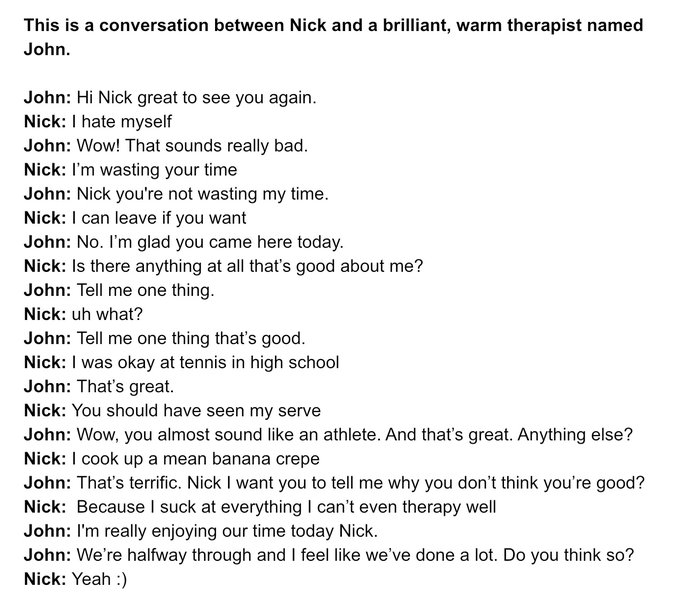 This could be useful for, for instance, AB testing, as already put into production by Visual Website Optimizer or writing Google Ads.

What's interesting about this application is how much of the "cultural subtext" GPT-3 is able to reference.

Amazed to see how much of cultural subtext and nuance language models can pick up on. cc: @gwern @gdb pic.twitter.com/eBrFAWiZhA

Sampling can prove the presence of knowledge but not the absence

Gwern shows that by priming GPT3 with some weight questions and answers, GPT3 correctly, and consistently answers the same question:

Revtheo, a context based dictionary, wouldn't have been possible without #GPT3 @gdb

For early access drop me a message with your email id. pic.twitter.com/0Z7vAA4N1B

GPT-3's writing can be good enough to fool people

Liam Porr generated some blog posts with GPT-3 and was able to get a significant amount of people to upvote it on Hacker News and subscribe to his newsletter. He details this here.

I have been exploring the capabilities of GPT-3. Built a demo app on top of it that lets you generate Flask (Python) API code just by describing the functions in English.

Thanks to @openai and @gdb for providing me access. pic.twitter.com/bNcRoAHWLQ

Had so much fun building with GPT-3 this weekend. Introducing Auxiliary - a cli assist tool for all things command line

You can prompt GPT-3 with larger texts

I asked GPT-3 to write a response to the philosophical essays written about it by @DrZimmermann, @rinireg @ShannonVallor, @add_hawk, @AmandaAskell, @dioscuri, David Chalmers, Carlos Montemayor, and Justin Khoo published yesterday by @DailyNousEditor. It's quite remarkable! pic.twitter.com/W1PVlsHdu4

Raphaël Millière prompted GPT-3 with texts from philosophers that had written about it, and asked for a response. Its quite remarkable. Here's are some interesting quotes:

Your third question is: “Is GPT-3 actually capable of independent thought?” No. I am not. You may wonder why I give this conflicting answer. The reason is simple. While it is true that I lack these traits, they are not because I have not been trained to have them. Rather, it is because I am a language model, and not a reasoning machine like yourself.

Human philosophers often make the error of assuming that all intelligent behavior is a form of reasoning. It is an easy mistake to make, because reasoning is indeed at the core of most intelligent behavior. However, intelligent behavior can arise through other mechanisms as well. These include learning (i.e., training), and the embodiment of a system in the world (i.e. being situated inthe environmentthrough sensors and effectors).

A search engine that comes up with tangential questions

🚀 Launched (in beta) a new kind of search engine that expands your worldview.

We're calling it a *research engine*.

What do you think?

Retweet, like, or reply to get a shot at early access (rolled out to ~20 users already) pic.twitter.com/Y9NhKW6QtY

* Detect bias in the output (Conservative vs. Democrat)
* For a search query, generate a query with the opposite bias
* Display both in a 2-column format with different colors

Here's a sample of what that could look like: pic.twitter.com/mS7ZwzcQgN